Well, these are just ridiculously good.

The combination of the sugary dough and salty flakes is perfection.  I didn’t include the cranberries, Paul’s not a fan.  So my version is much more simple than Ina’s (yes the Barefoot Contessa and I are on a first name basis, we’re great friends – at least in my mind).  However that aforementioned sweet/savory combination brings a complexity to such a basic cookie.  I would’ve liked a walnut thrown in but Paul doesn’t like those either.

Pretty much anyone who cooks or bakes knows that the quality of ingredients makes all the difference in the quality of the dish.  Yeah, yeah, yeah… yada yada yada.  But seriously, it’s so true!  The chocolate I used for these cookies were little drops of heavenly love.

Last weekend Paul and I were wandering around Los Olivos, a cute little town about 45 minutes north of us.  During our visit we stumbled upon a chocolate shop called Strafford’s Chocolates.  These people do not mess around when it comes to chocolate.

First of all, the actual shop is in an old ranch water tower, maybe from the early 1900’s.  Who woulda thought to put a chocolate shop in a water tower?  It’s adorable!  The space is homey and cozy and just draws you in.  Everywhere we looked we were in awe.  So of course we had to buy a bunch of things.  One of the purchases was two bags of homemade chocolate chips.

You wouldn’t think that the flavor of chocolate chips would vary that much, however it definitely does.  No preservatives, no chemicals to make them last on a grocery store shelf for years.  Now don’t get me wrong, I love Tollhouse as much as the next guy.  But these chips were just so honest, so true.

Right about now ya might be thinking that I’m a little crazily obsessed with chocolate and you would be absolutely right.

The moral of the story is go to Strafford’s Chocolates and stock up on all their goods.

DIRECTIONS:  Preheat the oven to 375 degrees. Line 3 sheet pans with parchment paper. In an electric mixer fitted with the paddle attachment, beat the butter, brown sugar, and granulated sugar on medium-high speed for 3 minutes, until light and fluffy. Scrape down the bowl with a rubber spatula. On low speed, add the vanilla, then the eggs, one at a time. Scrape down the bowl again. Meanwhile, sift the flour, baking soda, and salt into a medium bowl. Mix in the oats. With the mixer on low, slowly add the flour mixture to the butter-sugar mixture. Don’t overbeat it! With a rubber spatula, stir in the chocolate and cranberries until the dough is well mixed. With a 1¾-inch ice cream scoop (or two spoons), scoop round balls of dough onto the prepared sheet pans. Sprinkle lightly with fleur de sel. Bake for 10 to 12 minutes, until nicely browned. Serve warm or at room temperature. 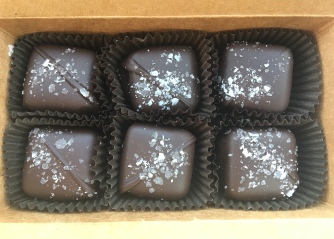