Often when I write my blogs after baking I refer to all of the mistakes I make because my dear friend, Laura, will interrupt me with texts or a phone call.  The mistakes are never my fault, I swear.  Anyway rather than texting and calling, Laura simply participated in my baking conquest this week.  Paul dove in too helping while we all laughed, drank prosecco, and listened to music.

As I buzzed around the kitchen, Laura was in charge of thoroughly mixing the lemon zest and sugar while Paul sifted the dry ingredients into a powdery cloud.

Laura’s comment was, “This would be a lot easier if you had a mix from a box.”  I looked at her with both horror and disgust.  Day Day Chenoweth (my mom) taught me correctly… baking comes from scratch and elbow grease, not a mix!

After carefully dropping the batter into the cupcake tin (with much scrutiny and comment from the side gallery) I popped them into the oven.  I finished the cupcakes last night with a brush or two of lemon simple syrup. This morning entailed completing them with swirls of lemony goodness that is the frosting.

This is seriously an awesome recipe.  So yummy, so summer!  They’re especially fun to make if you’re dancing around your kitchen to the Young MC station on Pandora, but you’re your own DJ.  Do it up your style. 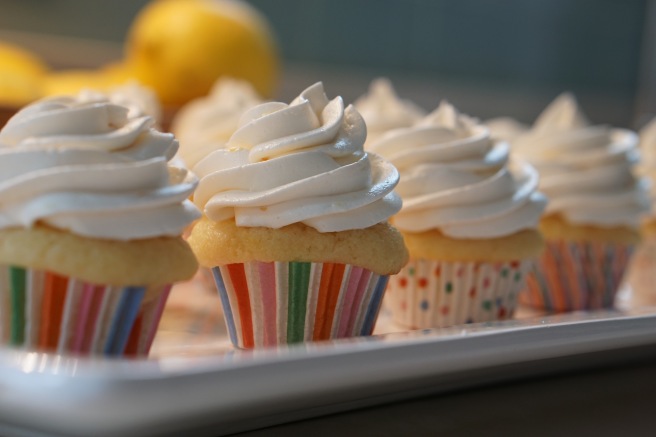 DIRECTIONS:  Preheat oven to 350 degrees. Sift all-purpose flour and cake flour into a mixing bowl. Add baking powder, baking soda and salt and whisk 20 seconds, set aside. In a food processor, pulse together 3/4 cup + 2 Tbsp granulated sugar with lemon zest until finely ground, about 1 minute. In the bowl of an electric stand mixer fitted with the paddle attachment, whip together butter with lemon sugar mixture until pale and fluffy (if you don’t have the paddle attachment that constantly scrapes bowl, then occasionally throughout entire mixing process, stop mixer and scrape down sides and bottom of bowl). Mix in egg, then mix in egg whites one at a time, adding in vanilla with second egg white. In the liquid measuring cup used to measure buttermilk, whisk together buttermilk with lemon juice. Add 1/3 of the flour mixture to the butter/egg mixture, then mix just until combined. Then add 1/2 of the buttermilk mixture to the butter/egg mixture and mix just until combined. Repeat process with flour and buttermilk mixture once more then finish by mixing in last 1/3 of the flour mixture. Scrape down sides and bottom of bowl. Divide batter among 12 paper lined muffin cups. Bake in preheated oven until toothpick inserted into center of cupcake comes out clean, about 18 – 20 minutes. Remove from oven and allow to cool several minutes in muffin tin, then transfer to a wire rack to cool slightly. Meanwhile prepare simple syrup. For the simple syrup: In a small bowl, whisk together 1 Tbsp lemon juice with 1 Tbsp granulated sugar until sugar has dissolved. Brush mixture over warm cupcakes (use all of it, about 2 light coats over each cupcake). Allow cupcakes to cool completely. For the Lemon Buttercream Frosting: In the bowl of an electric stand mixer fitted with the paddle attachment, whip butter with lemon zest on medium-high speed until very pale and fluffy (it should be nearly white. If using a paddle attachment that doesn’t constantly scrape bowl while mixing, then stop mixer occasionally throughout entire mixing process and scrape down bottom and sides of bowl). Mix in 1 cup powdered sugar, then blend in lemon juice, cream, vanilla extract and lemon extract. Add remaining 1 1/2 cups powdered sugar, then whip mixture until very fluffy, about 4 – 5 minutes longer. Pipe or spread frosting over cupcakes. Decorate with lemon slices or lemon drop candies and mint leaves if desired. Store in an airtight container.