I asked Paul if ‘cinnamon swirl bread’ sounded good for this morning’s baking experiment and his response was, “Ahhh yeah!  Make that!”

The kitchen, and eventually the house, filled with the smell of cinnamon.  The bread began to rise.  The minutes ticked by (slower than molasses).  The anticipation was killing us.

After many additional minutes of cooking, I finally pulled the cinnamony/sugary goodness out of the oven.  “Oh it’s beautiful!”  The top looked a lot different than the recipe picture, but it ended up having a crunchy effect which was nice.

Paul helped me drizzle the glaze over the top of the bread and we eagerly dug in, not waiting for it to “cool completely” as the recipe says.  Really, who has that much self control?

I gotta say, I was totally underwhelmed.  It was just okay.  It looked so tempting, the aroma was amazing!  I expected fireworks but got a tiny spark.  The bread was good.  But just good, not great.  Paul liked it, but I was a tad bit disappointed.

Give it a go and see what you think. 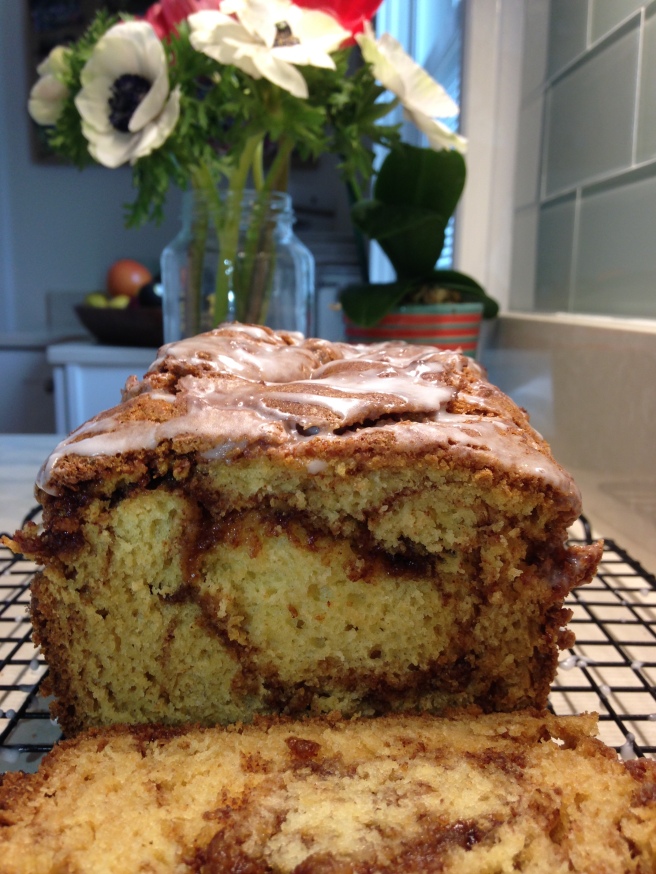 DIRECTIONS:  Preheat oven to 350°. In a large bowl, combine flour, 1 cup sugar, baking soda and salt. Combine buttermilk, egg and oil; stir into dry ingredients just until moistened. In a small bowl, combine cinnamon and remaining sugar.  Grease the bottom only of a 9×5-in. loaf pan. Pour half of the batter into pan; sprinkle with half the cinnamon-sugar. Carefully spread with remaining batter and sprinkle with remaining cinnamon-sugar; cut through batter with a knife to swirl.  Bake 45-50 minutes or until a toothpick inserted in center comes out clean. Cool 10 minutes before removing from pan to a wire rack to cool completely. Combine confectioners’ sugar and enough milk to reach desired consistency; drizzle over loaf. Yield: 1 loaf.