You know everything is going wrong when you laugh uncontrollably when you very unsuccessfully tried to flip the tortilla.

When I was in Spain I fell in love with a very simple dish ~ the Spanish tortilla.  Imagine a quiche like potato and egg dish that is both hearty and delicious.  Tortillas have very few ingredients and very few steps, yet they make just a lovely meal!

I happened upon a recipe this week in Sunset Magazine (they have awesome recipes!) and was stoked because I’ve always wanted to make one.  So in I dove!

I knew I was in trouble when the recipe called for two cups of olive oil.  Paul almost had to make an emergency trip to Trader Joes, but we squeaked by with just enough.  Now, anyone who knows me knows that I don’t fry food.  The reasons being:  10% trying to be healthy, 90% I’m scared to hurt myself.  But I was determined to make this dish, so I took the bull by the horns and poured potatoes and onions into bubbly oil and said to myself, “Fry baby, fry!”

As Paul got ready to go get his Sunday morning coffee, he walked into the kitchen and said, “Anne, this doesn’t look like baking.”  Clue number two that maybe I got myself into something more than I could handle.  I reassured him that this would be great (although doubt had already slowly snuck into my mind).  I occasionally stirred the frying mixture as I chopped parsley and read the recipe.

Clue number three that this would either be an interesting disaster or a fabulous success was the fact that the recipe called for a 10 inch frying pan.  I only have a five or six inch pan.  Oops (man I have got to start pre-reading recipes).  Well, I could make it work because I am just that good (sarcasm)!  I poured the egg/potato mixture into my tiny frying pan and hoped for the best.

All was actually looking pretty good (shockingly), until I got to the flipping step.   So  I grabbed a large plate, placed it over the pan, and PRAYED!  If you can picture raw and cooked eggs, potatoes, onions, oil, and parsley flying everywhere, you’ve pretty much pictured my reality.  I could not stop laughing!  When something goes that wrong, all you can do is laugh.  It was pretty darn funny!

So I poured my pathetic attempt at a tortilla back into the pan, chopped it up into a scramble, and called it a day.

By the way, I would try this recipe again but with a few changes (see recipe below) and better preparation.  Give it a go if it sounds yummy to you.

Combine potatoes, onion, and salt in a bowl.  Set aside.  Heat oil in a large frying pan over high heat until very hot but not smoking.  Spoon potato mixture into oil, spreading evenly.  Cook until at least half the potatoes are browned, using a slotted metal spoon to turn potatoes occasionally, 20 minutes.  Set a strainer over a bowl and pour in potatoes, let drain.  Reserve 1 tbsp. oil.  Fold eggs into potato mixture in a large bowl.  Stir in parsley.

Heat reserved 1 tbsp. oil in a 10 inch nonstick frying pan over medium heat.  I would spray the pan with baking spray first just to ensure that the eggs won’t stick (one of many of my problems).  Pour egg mixture into pan, spread evenly.  Cook, lifting edges to check color.  When eggs are medium brown, remove from heat.  Set a large plate upside down over pan.  Invert tortilla onto plate, then slide back into pan.  Cook over medium heat until bottom is browned, about 4 minutes.

(I would skip the flipping step altogether, cooking the eggs from the bottom then once browned, placing the entire pan under a broiler to cook the top.) 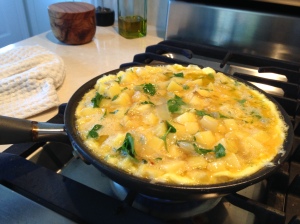 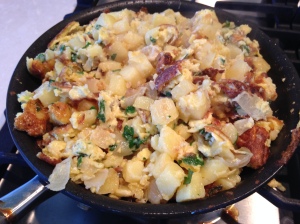